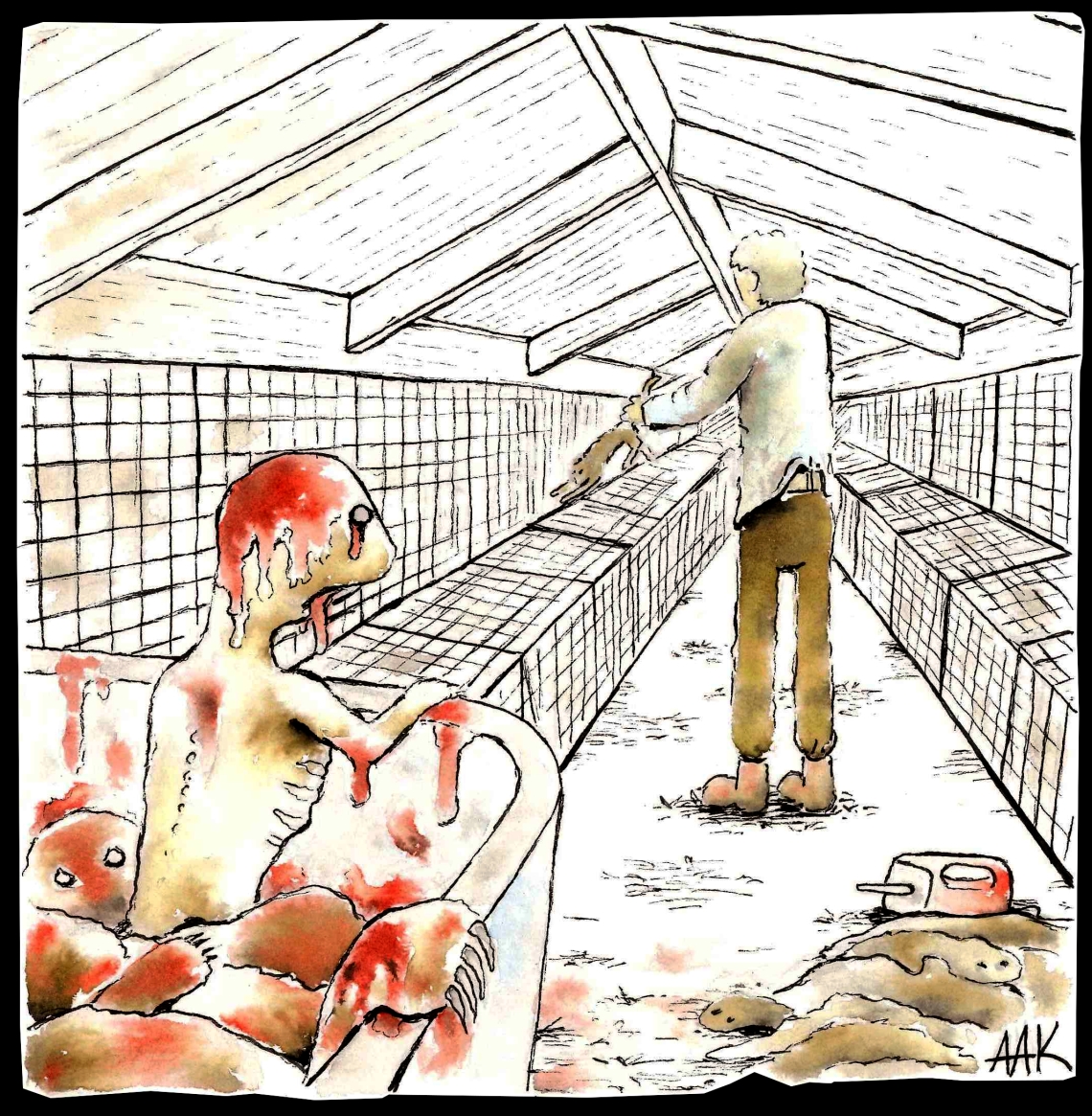 They could feel the cold draft from the door opening. With it came fear, running down the hall, hundreds of small animals shrinking in terror. Steps. Slowly down the path. A snort. Spit. He stopped. He was standing in front of her cage. The man. The man of death.

They were four in their cage now. Number twenty-three was lying dead in the corner. He had been for quite a while, he was starting to smell.

The sound of the metal lock. A door opening. She ran in circles, incapable of getting anywhere.

The door closed. It wasn’t her this time. It was number twenty-two, another one of her siblings. He was carried over the floor. The man stopped. Picked up the death stick. The little animal was fighting to get loose. No one had ever escaped.

The man held him up in the air. Shoved the death stick up his rectum. The electricity made him shiver for a moment. Then he ripped his skin off, threw the flawed body in the container. The place where the smell came from. The smell of rotting meat.

Silence fell over the hall. All they could do was to wait for the next to be freed from hell, yet they feared the stick more than anything.

A strange noise could be heard. Number twenty-five lifted her head. The sound came from the container. A head could be seen looking over the edge. Skinless and bloody. Dead eyes staring at her. Then it fell back in. She could hear moans. Strange moans of horrible pain and suffering. She shivered and crept in to the others in the corner.

The man came back. Walked down the aisle. Horror ran through the cages, increasing with each step. He opened a gage door. It was hers.

She cowered, tried to avoid his hand. He grabbed her, pulled her out. Carried her over the floor.

She fought in panic, but the hand was too strong. He picked up the stick. The man was looking at her in a strange way. He seemed to enjoy it.

Behind him she could see bloody carcasses falling out of the container.

-Ouch! He looked down. A skinned mink was biting his leg. -What the… He kicked it over to the other side of the room. Another started climbing him. The floor was crawling with them. Number twenty-five fell. She ran over the corpses towards the closed exit. She didn’t know much, but her instincts told her flawed minks should not walk. They should not move at all.

The man was kicking the minks away. He fell. Soon they were all over him, biting, scratching. Tearing his clothes off. Eating his skin, flawing him alive. He was screaming, fighting. Covered in a mass of moving rotten meat and teeth.

They grabbed the death stick. He looked down as the bloody little monsters pulled down his pants.

He shook for a moment, making strange noises. Finally he stopped moving.

The door opened. His wife froze by the horrible sight. She screamed. The dead minks charged at her. Number twenty-five ran. She ran out the door, into the forest as the sound of the butcher’s wife’s screams could be heard further and further away.