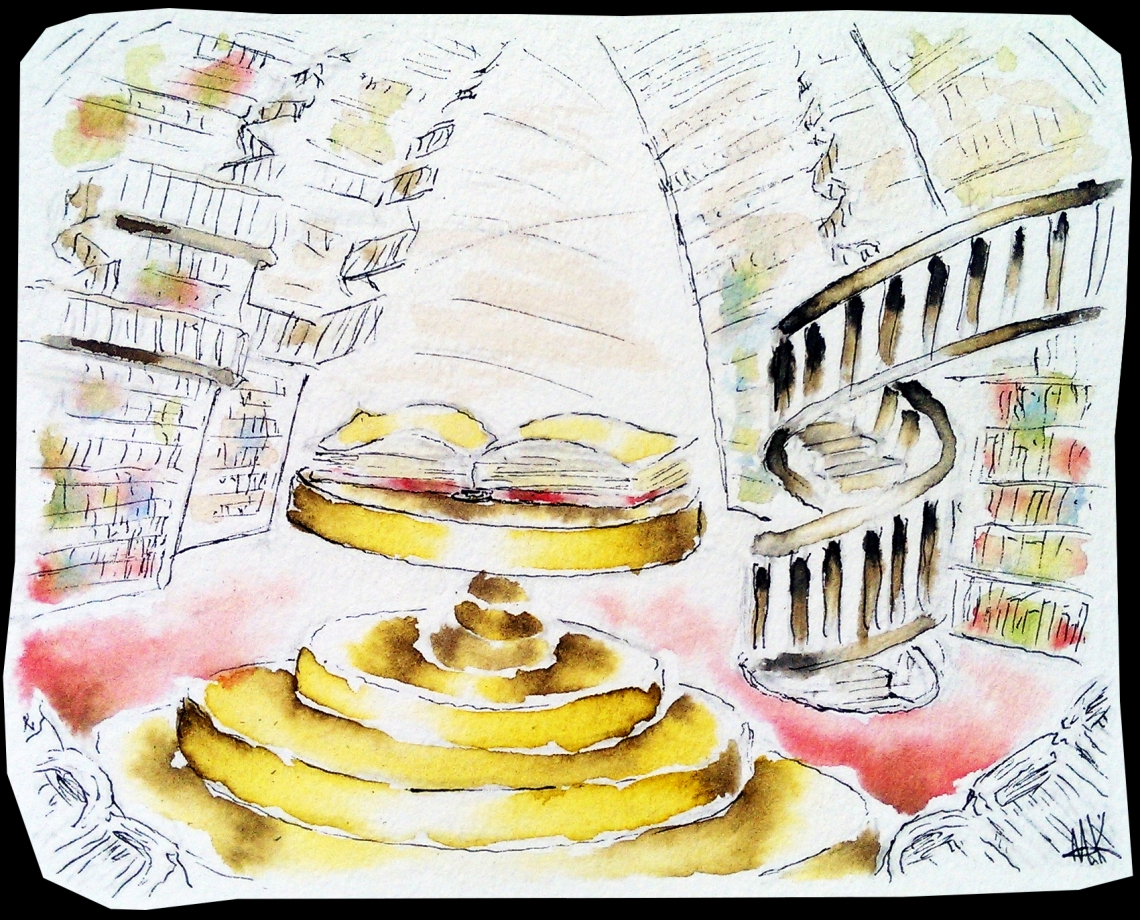 The sun was going down. Beautiful, changing colours ran over the landscape, making it all intense and alive. In a far Mirk could see the old house on the top of the mountain as his uncle had told him. It didn’t look like much. He was supposed to continue his studies there, and he wondered what could make that little house better than the university he’d come from.

He was a great student. He’d always loved maths, and had become one of the best students on the mathematics course. Meta-mathematics was his favourite. How it all worked. Logic, the most intriguing part of it all.

He climbed the stairs up towards the house. Strange birds were flying around the tall, almost cylindrical mountain as the view spread out underneath. He saw lakes, forests and hills. He had come from the east, where his town was. To the west he could see what was called the unknown lands. No one knew what was beyond them.

He arrived at the top and stretched his back. His rucksack wasn’t really that heavy, but it had been a lot of stairs. The house was bigger than it seemed from below. It had a tower on one side, and a huge front door. A metal dragon held a big ring in it’s mouth. He lifted the ring, let it fall. He could hear the knock echo through the halls on the other side.

He waited. He knocked again, this time twice. Nothing happened. He sat down with his back to the door. It had been a long journey. He heard something. A door was opened somewhere deep within the house. Footsteps coming closer. He jumped up, straightened his clothes. Keys turning. A moment of silence. The door opened slowly.

A little old man was standing there. Very old, and very little. He glared upon him with a curious look, examining him for a while.

H… Hello! Said Mirk nervously. The old man said nothing, just kept looking at him, at his clothes, his little bag.

The old man turned and walked back into the house, disappeared into the shadowy darkness.

Come, apprentice. Please, come on in.

The house seemed bigger from the inside. It was beautiful, with corners and crevices everywhere. Candle lights. Mirk followed the old man up a big staircase to the second floor. There was a door at the end of the hall.

It was a small chamber, scarcely furnished with a bed, a small desk and some drawers. It was dusty, with spider webs everywhere. From the window Mirk could see a spectacular view, he could even see the lights from the city in a far.

You might want to clean a bit, said the old man. I’ll be waiting in the library for your first class.

Never had he seen anything like this. The library was huge, much bigger than the house, challenging any concept of geometry he’d ever known. Winding stairways seemed to go on forever. So many books. Big books, small books. Books of every colour he’d ever known and more. There was one bigger than himself lying on a round table. Slowly he walked over, looked at it. Strange formulas could be seen, symbols he didn’t even understand how was drawn, let alone their meaning.

So you found it.

Mirk spun around. The old man was standing there, right beside him. He smiled a friendly smile.

What… what is it? Said Mirk. He looked back at the big book.

There are numbers in this world beyond counting, said the old man. Numbers we cannot understand. A set of numbers, another system, where inexplicable things are explained. Outside of our reason and logic, deeper than philosophy and science, yet far more real that any religion. This is what you’re about to learn. You’ll never fully understand, but some day you’ll be able to handle them. They are the base of reality. Some call them… magic.

As he said the last word, the book’s sheets flapped, as in the wind, but there weren’t even a draft. Mirk looked at the symbols. They were shining.

He turned the page to see more. This was going to be a good semester.