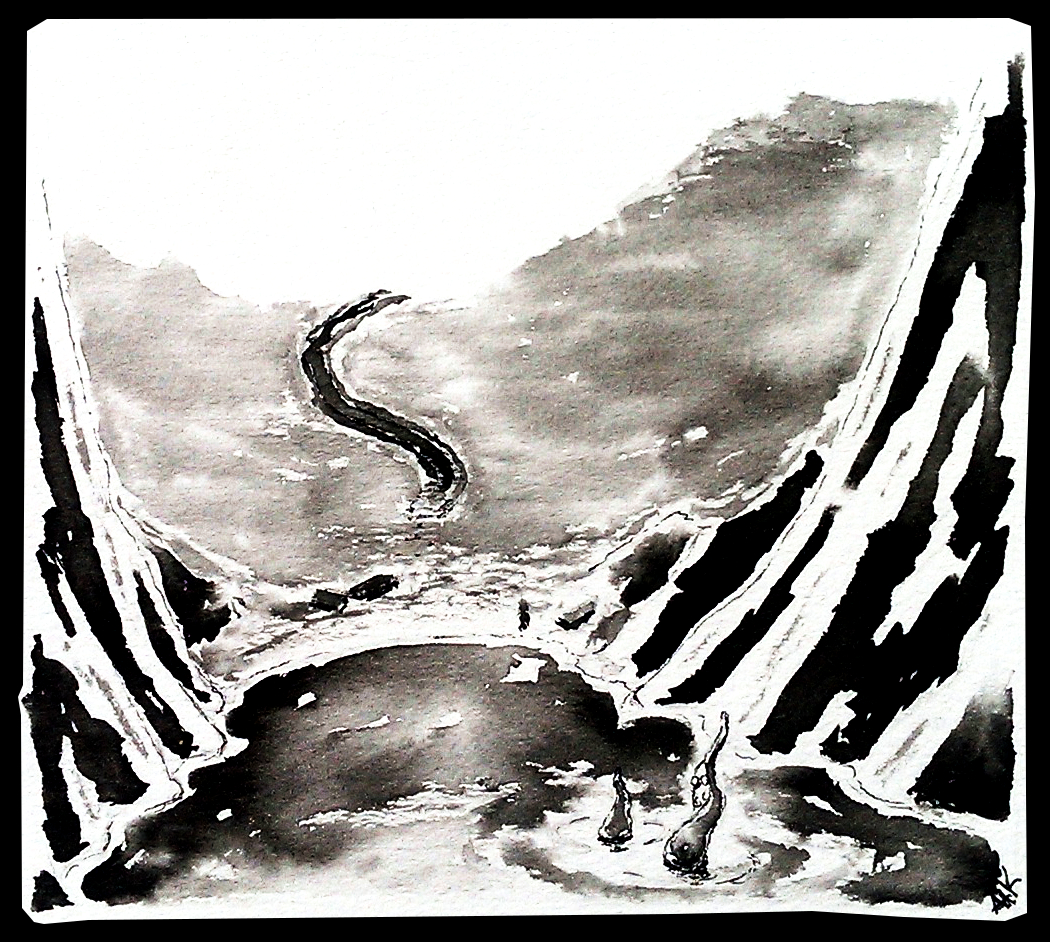 Olaf looked down towards the beach. Did something move down there? The sea was fierce today, so no one would probably be stealing his little boat, but he had some fishing equipment there as well. He started walking down the stairs to have a look.

Something moved in the shore. What was it? A fish? Some kind of animal? He moved closer, walked along the water.

Something grabbed his ankle. Dragged him out into the ocean.

Henry woke up by the daylight coming in through the window. He looked at the clock. Eight thirty. He had overslept again. His boss was going to kill him.

Another missing person case. It was the third this week, but this one was different. It was a guy named Olaf Martinsen living in a village down by the sea. He had gone out for a walk a couple of days ago, and hadn’t come back. Henry was put on the case.

Martinsen’s wife was the one who reported him missing. Henry went to see her. They spoke for a while.

-He said he was going up on the hill. She was crying, tears running down her beautiful face. -He might have gone down to the little beach on he other side, where his boat is. It’s still three, I checked. Oh, what do you think has happened to him?

He went up on the hill to have a look. He could see the beach underneath, The little boat.

He walked down the stone stairs. The last part was difficult, the stairs had fallen down, seemingly a long time ago, but he got there. He sat down on a rock, inhaled the air, felt the atmosphere. Listening to the relaxing sound of the sea caressing the sand. He saw something, moving in the small waves coming up in the sand. He got up, went closer.

It was a shoe. He picked it up. He’d have to ask Mrs Martinsen if it was her husband’s. Olaf was a big man, according to the report, and the shoe was size forty four. It could very well be his. He looked out on the sea. He felt like the answer lie there, under the surface. A strange thought, but if there was something he had learned during his years as an investigator, it was to trust his intuition.

Martinsen’s boat was pulled well up on the beach. He probably wouldn’t mind him borrowing it. He got it down on the water. The bottom went almost straight down into the darkness.

He sat there, watching the bay from the sea. It gave him a different perspective. There was a little beach, and steep cliffs on each side as far as he could see. Olaf couldn’t have gone anywhere else than up the stairs again or into the sea, and his boat was still there, but Henry had a strong feeling the bay was the ticket to this mystery.

Time went by as he sat there in silence. The sky was getting darker. He grabbed the oars and started rowing towards the shore. Something made the water move strangely in behind the boat, right in front of his eyes. As if something was moving underneath the water, something big.

He started rowing faster. The boat hit something. He turned his head. There was nothing there. He heard a sound behind him. A tentacle rose tall from the water. He moved away from it. It slammed down over the boat.

The boat was crushed and sinking. He looked around. The beast could not be seen. He swam fast towards the beach. He felt ground underneath him. Got up, ran up towards the broken staircase. Looked over his shoulder. Tentacles was moving up towards him. A huge head rose from the dark water. Yellow, beady eyes met his.

A look of evil. An intelligent creature with an urge to destroy him. It moved up on the beach. Fast. Faster than a sea creature should.

Rocks fell as he climbed up the steep hill. He reached the stairs. Ran a few steps. Fell. The monster was coming up towards him. A tentacle grabbed him. The staircase gave in. He fell in an avalanche of rocks, bricks and concrete. He was lying on the sand. He was alive. The monster was lying underneath a big piece of the staircase fighting to get loose.

Henry started climbing. He could hear screams from the creature behind him. He reached the staircase. On the top he turned around.

The monster was coming up after him.