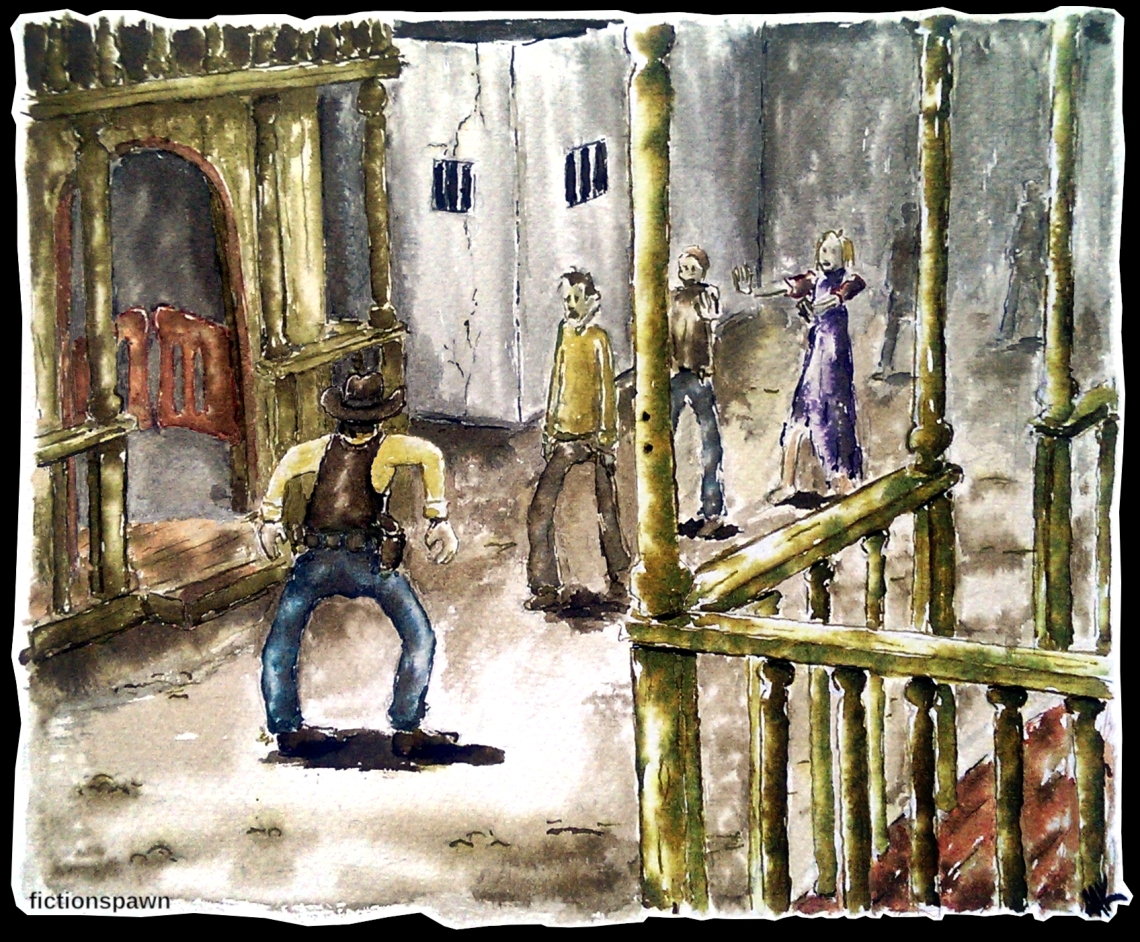 Marshal Clifton rode into town. He had been riding all day, and the sun was going down. He couldn’t wait to get a warm bath and a meal, and a good glass of bourbon.

He had been sent out here to check on things. There had been no news from the town for a long time, and the central authorities were getting worried. Clifton didn’t really see the problem. No news were good news, he’d always said.

The main street was empty. Strange, he thought. This town was known to be full of people, a vibrant mining town. Now there was no one. He jumped off his horse tied it to one of the poles outside of the sheriff’s office, knocked on the door. No answer. He peered in through a window. No one. He went out into the street, walked around the corner. Passed by the famous tavern, known for its beautiful women and great atmosphere. Dead as a rat. He started believing something really was wrong around here.

He saw something move. A shadow was coming out from one of the backstreets. A man. He came walking towards him. Others appeared from the darkness as well.

Howdy! Clifton said. How come there’s so few people around?

No answer. They walked up the street towards him. They moved in a strange way, slowly, clumsily. One was limping, another seemed to be missing an arm. His horse neighed.

The marshal loosened the cap on his gun holster.

One of the figures moaned. They were coming uncomfortably close.

Clifton pulled his gun in a fast movement.

Stop! He said. Don’t come any closer, or I’ll shoot!

He could see their faces now. Their eyes. They looked… dead. Empty.

He fired a shot. In the air, to see if he could scare them off.

Clifton fired his gun again. Hit the closest one in the chest.

Clifton aimed at his head. Fired. Half his head blew off, brains splashing onto the man behind. The monster fell. He shot another. And another.

Clifton heard a sound. He turned around. Dead people came walking out of the houses. From the backstreets. From everywhere. He ran towards his horse. Three dead women were surrounding it. One lacked an eye. Another had a big piece of skin hanging from her back. The horse screamed, rose up on two legs. Clifton’s guns were empty. The horse kicked. One of them flew away, just to get up again.

Clifton kicked one of the zombies in the back. Another grabbed his shoulder. His fist sunk into the the rotten face. The corpse fell to the ground.

The third zombie bit his horse. It jumped wildly, broke loose from the pole. Clifton as he was surrounded by zombies. Men, women and children. Tens, maybe hundreds. The horse ploughed its way through the crowd, bodies, arms and legs flying to all sides. Clifton grabbed its rope as it passed by. Hung on as the horse ran down the street. A zombie held on to Clifton’s leg. He kicked it. Kicked it again. It’s arm broke loose. The body lay moaning in the street.

On the way out of town he got himself up in the saddle, and they rode out into the darkness. The Governor would not believe a word of it, but it didn’t matter. He had got away.

The Crows Know the Dead Remember