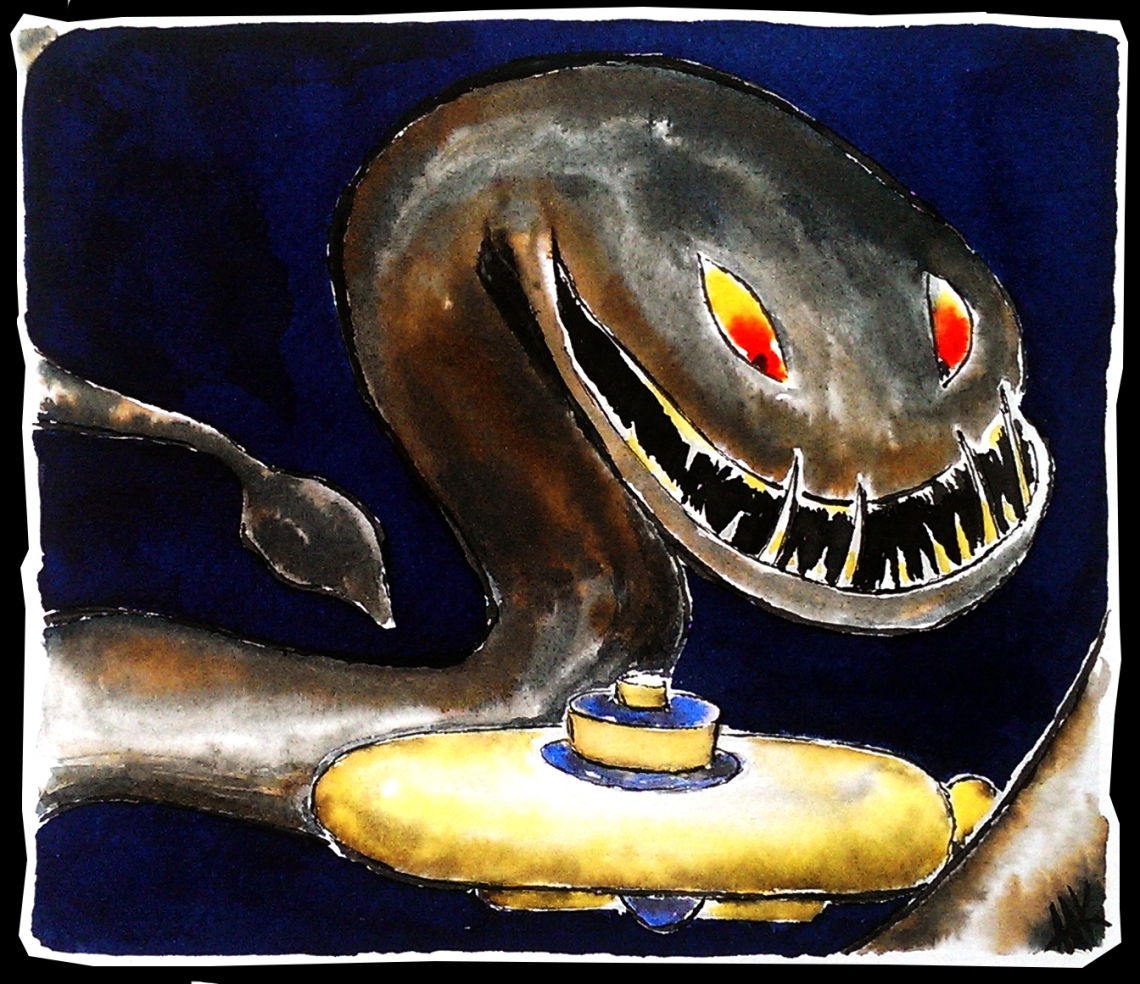 -Captain! Something is approaching. Something big!

Captain Johnson looked at the radar. It was big. Big as a whale, or even bigger. There were no whales on fifteen thousand feet depth.

Gebbler was watching through the thick glass window.

Two red eyes were approaching in the dark. They were glowing, and were getting bigger and bigger as they came closer in the dark water. One eye was staring at him as the head past the submarine. Its body seemed to never end.

Hansen was standing beside him. -What… What in the deep sea is it?

-It looks like some kind of fish, an eel or something.

-Then it’s the biggest fish anyone have ever seen.

-The wonders of the deep sea…

The boat shook. Threw them off their feet.

The indicators on the screen were out of control. Numbers running at unreadable speed.

The walls were making strange sounds. Water started shooting in from around one window.

-Into the emergency wessel. Now!

Gebbler, Hansen and Captain Johnson jumped through the door.

-Jameson! Get in here!

-The fish body is blocking the exit. We won’t be able to shoot it out!

Gebbler grabbed controls to the drill designed for taking samples of the sea bottom. He moved it towards the creatures body. He felt dizzy. His ears were ringing.

-Get into the vessel now!

Jameson ran into the vessel. Gebbler stuck the drill into the fish body. Blood mixed with the water pouring in through the cracks in the wall. The stream knee high. It was too strong. He fell He was thrown around like a puppet.

We have to save him! Hansen was holding the door open, Leaning out. Hoping to catch his friend. Jameson grabbed his shoulder.

They closed the door. Pushed the red button.

In the window in the floor they could see the submarine and the monster disappear in the depth.

-We’re going too fast! The pressure fall will kill us!

-He saved our lives… Hansen had tears in his eyes.

-There was nothing we could do to save him, captain Johnson said. -We were all about to die.

Hansen didn’t answer. He was staring over the captain’s shoulder, white as a sheet. The captain slowly turned his head.

A red eye was staring in through the window.