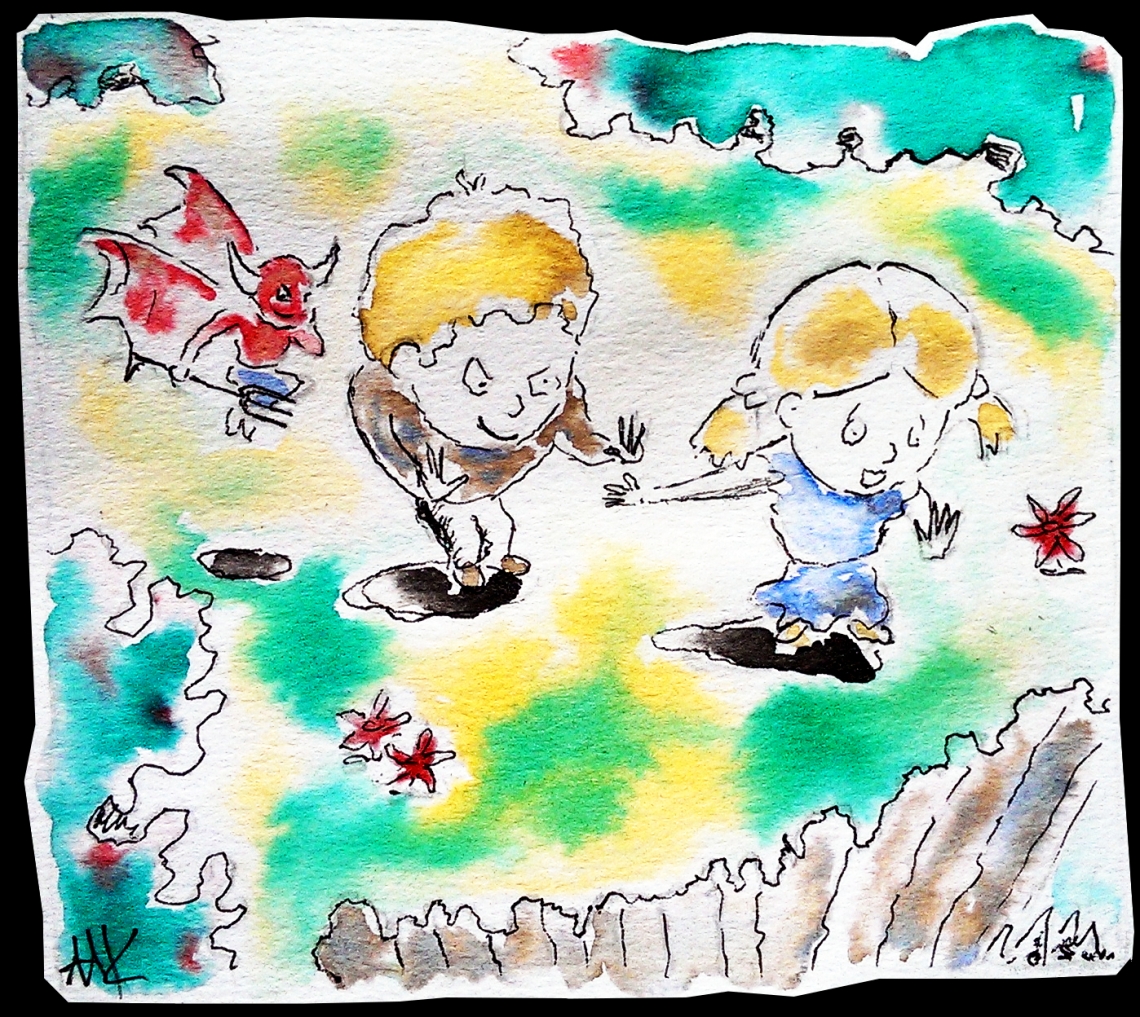 A little devil was watching the world. He hated it all, but sometimes it amused him. All these strange humans killing each other in the name of God or good or morals or whatever excuse they had. So much fun.

He wanted to do something different today. He usually spent his days corrupting the minds of the rich and the powerful, but it was getting boring.

He wanted to corrupt a child.

The little boy was playing with his friend, a girl the same age. The little devil looked at them for a while, then he moved closer.

This is for you, said the little boy. He held out a bouquet of flowers.

Oh, thank you! Said the little girl with a big smile.

The little devil frowned in disgust. He went over, and whispered in the boys ear:

Go play closer to the cliff…

The little boy looked over at the cliff.

Over there is a great place to play, he said.

At the edge of the bluff? But we’re not allowed to go there…? The little girl looked at the forbidden part of the garden.

It’s all a conspiracy to keep you away from fun….

That’s because our mommies don’t want us to have fun! Said the little boy. Come, let’s go! It’s probably great there! He started walking closer. The little girl followed, a bit doubtful. She did like to have fun.

The went over to the cliff. There was a log way down. The little girl waited some meters away from the edge as the little boy was looking down.

I don’t wanna! Said the girl. She was afraid of heights, but didn’t want to admit it.

I’ll give you candy if you come closer.

The little girl hesitated. Candy? She did like candy.

The boy looked at the girl. His best friend. He felt an urge inside, a strange, dark drive of evil, pulling him towards her.

He moved closer, rising his hands.

Somewhere inside his heart was screaming no. A voice was coming from the love of his friend, an emotion of warmth, a feeling of belonging. No.

No! He said out loud.

No what? Said the little girl, looking puzzled.

He stood there, looking at her. A part of him really wanted to see her fall. Just to see what happened.

Let’s go play somewhere else, he said. I don’t like it here.

As they ran back over the grass, the little devil’s stomach was revoking with loath. Vomiting he flew off to the parliament. He needed to restore his faith.