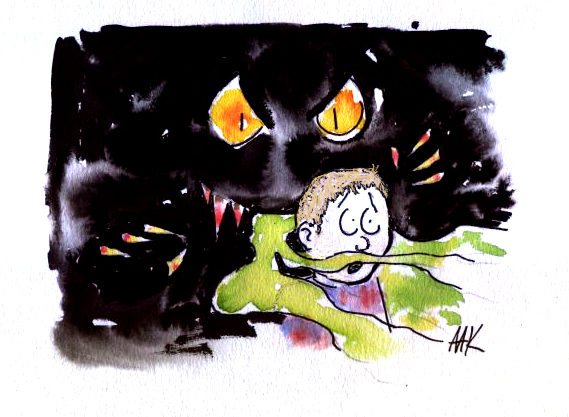 Jonas came home from school and threw his bag in the corner in the hallway as he used to. He had scowled the last class as he used to. And now he would take an after-school-wank. As he used to. He walked into the room, turned on the computer and was about write the keywords “cougar gangbanged by dwarves” when he noticed something strange lying on the desk. A small ball.

He poked it. It had a gelatinous consistency. It was disgusting. What was it? He picked it up, but dropped it immediately in revulsion when a green, stinking liquid came out of it. Yuck.

He went to the kitchen to grab a plastic bag. His little brother was going to get a beating. It could not been been anyone else. But what was it?

He entered the room again. It was gone. What the hell…? Was his little brother at home? He was not supposed to be home at this hour? He heard a heavy breathing behind him. A breath with a deep snarling sound. A foul odour. He turned abruptly.

No one there. He looked around. The little ball was on the floor. He took the plastic bag and was about to pick it up. It burst. Green liquid flowed out on the floor. Fuck. The liquid spread more and more. He took a step aside to avoid it. He took a roll of ass wipe standing beside the computer to clean it up. Hell, how much liquid could there be in a little jelly ball? It would soon cover the entire floor. He began to roll out paper over the pond. The paper sunk in and disappeared. In the middle of the stain a hole opened in the floor as if the liquid was etching through it. The hole slowly grew bigger. Jonas was getting scared. Then he heard the breathing again, behind him. The smell of rotten meat. The room darkened. He froze. Frightened he slowly turned.

He stared into the eyes of a monster. A demon with horns on the forehead. Warts on his face. Huge as an ox. Fangs. An evil light shone from its eyes as it grinned at him. It’s breath smelled of death. Jonas screamed. He screamed like a little girl. The demon pushed him into the hole in the floor and he fell down in a fiery hell. He regretted skipping the last hour of school that day.

13 Short, Creepy Stories That Will Scare The Crap Out Of You